i know it's been a long time. i truly do. i miss writing though. i know i am by no means a writer, but it helps me. i think it is really the greatest way to get rid of all of the heavy stuff that piles on through the day. i moved. i know, "finally" right? it's definitely the hardest thing i have ever done. i miss my family. i don't like the idea that i can't just go tell my mom some stupid joke i just remembered. or hash my day out with my sister, who will tell me the absolute truth even if i'd rather she didn't. or hear my dad tell a stupid joke from in the kitchen and laugh at himself for too long. or walk to the store with my brother. or just lay with my puppy. i hate this. but i have more freedom now. to do what i want to do. and you know what they say. "with great power comes great responsibility." it's all too true. it's hard to go to a new place and have to take in all these new faces. figure out who you like and who you don't. or, who likes you for that matter. it's hard to finally get over someone and then start a new crush altogether too soon. i hate love. i hate it. it's never been good to me and i'll be hard pressed to believe it ever will. the feeling of hope is nice, but it is vastly overshadowed by the feeling of hopelessness that succeeds it. enough is enough. i'm putting my foot down. i'm going to try and write in this more. no promises or anything. but i have a whole week and a half here by myself next week. so my thoughts and i are going to have plenty of time together. i'm sure you'll all get a little taste of what that's like and run screaming from your computers. i'm going to go to bed now. hopefully davey will stop talking in his sleep, partly because it will keep me awake. mostly because it's creepy as hell.
goodnight.
-b.
Posted by briannaspaulding at 1:51 AM No comments:

it's really as easy as this.

i don't believe in love. i have for so long. i've invested so much of myself in this idea, this dream, that maybe one day i'll be happy. since i was able to comprehend anything, i've depended on the idea of a prince or a knight. or the best guy in high school. or the guy i meet at random. or the one who's been there all along. and it never works. could this simply be that a higher power is stopping me from wasting any time? yeah, sure. but i'm not buying it anymore. just because some people get lucky. just because some people get there. just because my parents are happy. so what? they got lucky. and luck and i don't really have the best track record. i'm not looking for a pity party. i'm just sick of hurting all the time. of always being disappointed and let down. i can't do it anymore. and if i just drop my expectations, i'll be better off. it;s hard to believe in something you've never seen first hand. and i'm used to it. if love never comes along, i won't be any worse off.
i just don't believe in love anymore.
Posted by briannaspaulding at 11:10 PM No comments:

i almost quit this.

and then i didn't. it's just been slowlife, people. i've had acute bronchitis for two weeks, so i just need a break.
Posted by briannaspaulding at 9:41 PM No comments:

what a capital idea!

how in the hell am i supposed to look good in a hard hat? answer me that. it is a feat with which i struggle every day. i'm learning new tricks though, guys. no worries. i'm hoping to say a lot more in this post. i know lately my posts have been sparse, and i apologize for that if it bothered you any. i've just been so overwhelmingly busy. it's 6:25 and i'm dead tired. it hasn't been like this since senior year when i was doing plays. i love it. i feel like myself again. i think that's a quality i get from my dad. he's my boss and honestly, i've never seen a more charismatic and strong leader than he is. i knew he was good at his job, but seeing him in action is something else altogether. my first day on the job, i was terrified going in. it was three in the morning, i walk onto this job site absolutely bursting with men and heavy equipment. seriously, the testosterone was almost tangible. i had no idea what i was going to be doing. all i knew was that i had to be direct and forward with people and if you know me, you know that's not something i'm good at. i'm about a mile away from my mom and dad all day around all of these strange, bulky dudes. people are getting angry at me because i won't let them cross the bridge due to safety hazards. it's hot as balls. there's no where to sit. and no where to pee. and guess what? i rocked it. my dad got five or six compliments on me the first day. i'm not here to brag. i'm writing this down because for the first time in a long time, i'm proud of myself. my mother and i are two of only four women on this job. and it's a one hundred man job. i've met some of the most amazing people and i'm only half way through my second week. there are three different companies working on the project. magnus is the company that supplies the money and safety regulations. they're the head honchos. contractor services group (csg) are the contractors actually working on the project. and traffic management incorporated (tmi) controls safety of pedestrians and flagging on construction, that's me. there's val (csg), who my mom says she'd marry if she hadn't met my dad. he's short and italian and has a wicked beard. today he asked me if i'd give him ten percent of my pay check because he's awesome. we're discussing payment options tomorrow. there's shelly (magnus) who makes biscuits and gravy for the whole crew on tuesdays. pappy (csg) told me i had balls for doing this job and that i'm a smart girl. he also told this guy he would kick his ass if he caught him looking at me funny again. he's freaking awesome. brad (tmi) works across the levee from me. he says the funniest things over the radio. like, "well, if i'd have known that was poison oak, i wouldn't have scratched my back with it." then there's tim (csg) who saw me take my vest off to put sunblock on and has been spreading the word that i need a pay raise because i also strip on top of the levee. the boss of csg, john, has a full sleeve. and my parents were concerned about my lip ring. pshaw. there's a man with ocd who walks by me every day and waves hello to me three times and good bye once. there was a lady who put a witch craft curse on me the other day. i told her to have a good one. i have this squirrel that i see every day. he's missing a leg but he runs faster than any squirrel i've ever seen. brad suggested i call him tiny tim, so i do. sorry for rambling, i just have a lot to catch up on. i don't want to forget anything about this. i play "you make my dreams come true" over my radio for my coworkers as often as i can. i wear a reflective vest, steel toed boots, and a hard hat. i wake up at five every day for the hour commute and get to work at 6:45. we have a safety meeting and then we do stretch and flex. tim dared me to touch my toes and when i did, he touched the ground palms down. i was like, "WTF?!" it's the hardest work i've ever done. but i laugh often and am growing closer with my parents through it. i appreciate them a lot more now. oh, i have a guy i like too. but i'm not going to say anything here in case he stumbles upon it and gets all freaked out. to the point though, he's adorable. i'm getting a phone this weekend. :) i'll text you, i'm sure.
i love your life,
brianna.
Posted by briannaspaulding at 6:25 PM No comments:

a lovely compliment heard over my radio.

ron: "hey, bradley. do you hear those bells i was talking about yesterday?"
brad: "those aren't bells. that's brianna singing."
i love my job. and the people i work with. and the life that i'm living.
Posted by briannaspaulding at 11:35 PM No comments:

i'm not dead yet.

but it's a work in progress. i'm dead tired, for sure. i can hardly keep my eyes open, guys. i stand on my feet more than a hooker. at least they have the luxury of lying down on the job. hit me up, please. i miss people.
-b.
Posted by briannaspaulding at 10:04 PM 1 comment: 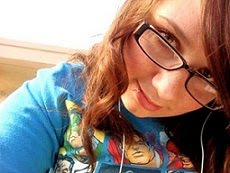